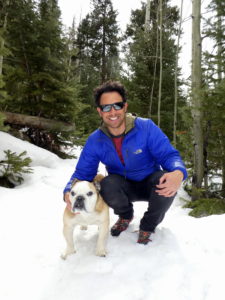 Josh Valentine is Communications Manager at the Clean Coalition, a nonprofit organization based in Colorado and California whose mission is to accelerate the transition to renewable energy and a modern grid through technical, policy, and project development expertise. He leads communications campaigns designed to help get the United States to 100% renewable energy as fast as possible.

Josh fell in love with Henry David Thoreau’s Walden during junior year in high school and has been driven and active in environmental conservation ever since. He advocates for the planet and its inhabitants, promotes renewable energy advancement, plant-based food production and consumption, and the important work required to achieve a more sustainable existence.

Josh founded and operated Promenade Media from 2007-2015, working with businesses and organizations to achieve success in web marketing, communications, and outreach. He helped develop content for new website launches and redesigns, produced digital video in the promotion of new products and services, and spearheaded web marketing and social media communication campaigns for renewable energy, freshwater conservation, and animal welfare initiatives.

Josh also serves as Digital Communications Director and board member for the Colorado Renewable Energy Society. He was a regular contributor to TriplePundit from 2014-2017 and served as president of the Maine Marketing Association from 2010-2013. He also headed Maine Businesses for Sustainability’s web marketing efforts from 2011-2012.

Josh is regularly involved in animal rights/plant-based/vegan activism, climate change causes, and renewable energy projects. He has been a vegan since 2007 and an active musician since 1988. When not working or playing music, Josh enjoys skiing, live shows, hiking trips, and volunteering at animal sanctuaries and dog shelters. He is also an outspoken advocate for hearing health and speaks publicly about hearing loss issues. Josh grew up in the suburbs of New York City and currently lives in beautiful Longmont, Colorado.

During this difficult time we're all facing, I’v